Thanks for stopping by - Please take time to click on the links for more info!

Mission Statement: We will partner with our community to restore and preserve the health of Warwick's water resources and wildlife to ensure their safe enjoyment by future generations

our next meeting:Tuesday november 1st @ 6 PM @ the warwick public library

NOV, 2020. Rhode Island has the highest rate of Bladder Cancer per capita in USA.
-Rhode Island Receives Failing Grades for Ozone Pollution on Air Quality Report Card,    Finds 2019 ‘State of the Air ‘American Lung Association’s 20th annual air quality report finds more than 4 in 10 Americans live with unhealthy air quality; Over 87 Percent of Rhode Islanders Are Breathing Unhealthy Air
-Rhode Island’s Air Quality Worsened for Ozone Pollution, Finds 2020 ‘State of the Air’ Report American Lung Association’s annual air quality report finds nearly half of Americans breathing unhealthy air; All three reporting counties in Rhode Island continue to earn failing grades for ozone
-Air Quality Report: Where Rhode Island Stands In 2021. The American Lung Association graded the air quality in Rhode Island and compared it to the rest of the country. Rhode Island received failing grades for ozone, but high marks for particle pollution levels.
It is estimated that there are 200,000 Rhode Island Residents that are living with Lung and Heart Disease. We have a population of approximately 1 million so that’s 20% of us! Think about that for a while, and relate that information to what you and your family as a resident of Warwick Health and Safety issues you are dealing with, This is the air each one of us breathes.
The former Truck-Away Landfill located at the south end of runway 16-34 at RIAC between Industrial Dr. and Buckeye Brook. The landfill was closed in 1978 and the numerous studies since including in 2020-2021 indicate Hazardous Waste is still leaching into the wetlands. The Possible Responsible Parties (PRP) Group wants to cover the landfill as their remedial remedy. This was the same remedial action implemented in 2008-09 and did not work. So what was the definition of insanity, Doing the same thing and expecting a different result?  The residents who live, the people who work, and the children who play at Winslow Park all in close proximity want the waste removed. Most if not all of the PRP Group entities are represented by Attorneys. Do you think that those attorneys are there to do the right thing or are they there to minimize their client’s responsibility and cost?
My opinion is that every time RIAC puts a shovel in the ground the Water Quality in Warwick Pond deteriorates further. The major Algae Blooms started during the Airport Expansion, and continue with a project started about a year ago for repairs on runway 16-34. This past year we had a major Algae Bloom that was not cleared until the second week in December. Coincident I thank not.
In the summer of 2015 Winslow Park was opened in its new location adjacent to RIAC. The field is approximately 300 ft West of Warwick pond and approximately 50 ft above the pond. The O&M Plan for the parks Storm Water Bioretention System required by DEM Permit has not been documented since the park opened. The plan is required to be executed and documented when there is a precipitation event of 1 inch over a 24 hour period. The weather bureau indicated there have been in excess of 700 over this period. The last Retention Basin has a Catch Basin that connects to the City of Warwick Storm Drain System that discharges into the pond. Warwick Pond has been closed for a portion of time every year but one since the park moved. Could it be because the water runoff from Doghouse #2 Catch Basin is full of nutrients? FOWPS filed a complaint to RIDEM on March 10th 2021. To this day the O&M Plan at Winslow Park has not been executed in violation of the RIDEM Permit. The response from the City of Warwick is We Will Look Into It. The RIDOH cleared the last Warwick Pond Algae Bloom two weeks into December 2021. It’s been 9 months and many precipitation events and still no execution of the O&M Plan at Winslow Park by the City of Warwick. Again part of the Cities plan to destroy our homes. Has the City of Warwick rendered RIDEM powerless to execute its mandate to protect our environment? RIDEM is understaffed and underfunded.
There are two sites across from each other on Warwick Ave. at Hoxsie 4 corners. One behind Walgreens has been in remediation for about 20 years and the other in front of the Car Wash for about 1 year.
The response from RIDEM/RIDOH is the Algae Bloom issue is complex. So the inference is this is something that you, we the residents should pursue the Harmful Algae Bloom Control Methods. I have looked into one of them. It is an initial cost of $120,000 dollars with a 10 year warranty. There is a maintenance cost of $8,000 dollars per year. That is a total cost of $200,000 dollars over 10 years. Again the agencies that are supposed to protect the environment and in turn us are underfunded and understaffed. In order to solve any problem you must first identify the root cause not the effect. The effect is a Blue Green Algae Bloom. The root cause I believe is excessive nutrients entering the water. So find out where they are coming from and eliminate them. Result is no more Blooms. RIDEM is understaffed and underfunded to complete this task.  Ask yourself a question, I wonder how many more environmental issues there are in our City and State? I will try to provide that information at a later date.
There is a property and road flooding issue in Warwick Pond. This issue was raised in Dec, 2015. The water level in 1987 was 12.60 ft above sea level. As of Dec 2021 it was 14.0 ft above sea level. The original completion date to resolve this issue was Dec, 2021. That has been rescheduled for Dec 2022 due to a $600 k budget shortfall. Warwick has a 30 million dollar surplus do you think they can spare 600k? My opinion is they do not care because it does not fit their plan to destroy our home. 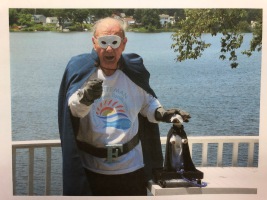 Together we are your friendly neighborhood environmental superheros, the sworn enemy of water pollution with an important environmental message for you. 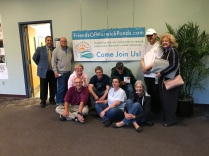 Though we may be few in numbers we are many in our accomplishments!

environmental phrase of the month:

The environmental phrase of the month is -Biodegradation – breakdown of organic contaminants into smaller compounds by microbial organisms through metabolic or enzymatic processes, with carbon dioxide or methane as the final product; processes vary greatly but are key in the natural attenuation of contaminants of leaking underground storage tank and hazardous waste spill sites.

A different kind of parade float

For a while it seemed like the only boat that would be joining the Warwick Pond Parade line was the pontoon boat that had the official banner hanging off the side of it, which was strung up with string provided by Friends of Warwick Ponds Coordinator Philip D’Ercole and secured by a quick couple of knots from Senate Majority Leader Michael McCaffrey and boat pilot Rob Farnzen.

The crew remained the only living souls out on the serene, sparkling waters of Warwick Pond under the heat of a sunny Sunday afternoon even after Warwick Mayor Joseph Solomon climbed aboard. The mayor was prepared, he noted jokingly, beckoning to the baseball cap covering his head – no top of the head sunburns for him today. He would later joke that a woman from the shore kicking her feet in the water couldn’t recognize him without seeing the shiny glare from atop his head.

Finally, as the self-described “redneck” boat belonging to Farnzen – a resident of Edgehill Road with a house, like many of his fellow Warwick Pond neighbors, directly on the waters of the pond – sputtered its two-stroke engine around the circumference of the large freshwater body, other naval neighbors did fall in line.

The crowd consisted of another pontoon boat, a family vessel that provided safe ferry for a small dog, a few kayaks and a couple other nautical craft. The boats all settled towards the middle of the pond and gathered around for D’Ercole to give a speech, lashing together with bungee cords and thin ropes to create a small flotilla.

“The beauty of this pond, the beauty of the water serves to show how important it is to preserve it,” D’Ercole told the crowd from the front of the pontoon boat, as Doug Clark taped it on his phone to post on Facebook later. “We are working tirelessly to preserve this for future generations.

Then, once D’Ercole had introduced his “celebrity” shipmates, Solomon stepped forward, indicating he planned on using “an even bigger stick” and to work with McCaffrey and other state officials to “keep these resources pristine so we can enjoy them and we can leave them for future generations.”

Indeed, that is the whole point of the Warwick Pond Parade (this one being the third annual) – to gather advocates together on the local resource that the Friends of Warwick Pond organize to protect and preserve.

D’Ercole mentioned that there are about 60 different points of drainage which flow directly into Warwick Pond, and is hopeful that the city will be amiable to a tentative plan to implement a multi-year plan to clean out or filter some of the catch basins which feed into the pond.

“We have our work cut out for us,” D’Ercole said.

As recently as last summer, concerns over an abundance of cytobacteria – microscopic species of algae-like blooms which can be harmful to people and pets if swallowed within the water – made waves among the conservationists around Warwick Pond. The bacteria luckily hasn’t reared its head this summer, and the water remained very clear Sunday afternoon.

Prior to heading out on the boat, D’Ercole showed off the ground floor and second story of his home, just a few doors down from Farnzen. Both levels feature beautiful open-air decks that look out onto the pond – a view that some would pay big bucks to have just for the summer, let alone all year long.

“Now you understand why we do it,” D’Ercole said.

On Sunday, Solomon came to the same understanding. It was his first time out on the water of Warwick Pond, and he soaked up the view like his hat soaked up the rays of the sun.